Possible contender for worst movie of the year?

Ferdinand is easily one of the worst movies of the year. I honestly cannot think of a SINGLE positive thing to say about this movie. Nothing. It reminds me of my balls after I wear jeans for 17 hours. Think of it this way: If “The Incredibles” is Muhammad Ali and “Coco” is Manny Pacquiao, then “Ferdinand” would be my blind, wheelchair-bound great-grandmother. And that’s an insult to my great-grandmother.

This movie is the very definition of basic. In a world where bulls dream of being the biggest and the baddest fighters — it’s prestigious to be selected to go up against matadors — we have Ferdinand, who prefers gardening and sniffing flowers like its fine cocaine. And so begins the torture in which the movie constantly and consistently reminds us EVERY BLOODY SECOND to “not judge a book by its cover” and “be whoever you want to be.” 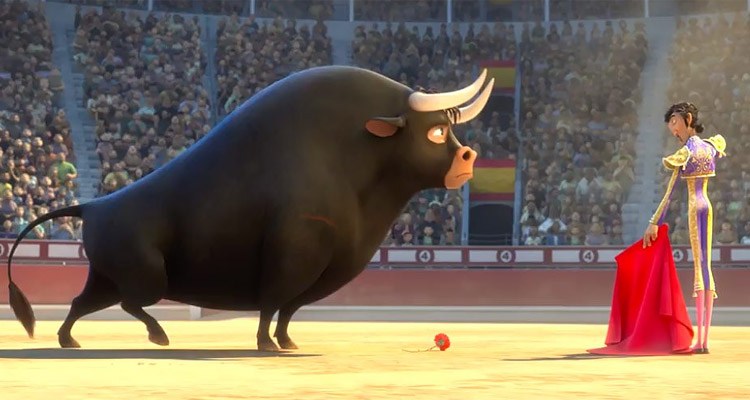 There is no character journey here. No exploration. Nothing psychological. Everything is one note. The best animated movies always have a lot of heart. Ferdinand has a lot of farts. It’s a fiesta of fart jokes and juvenile humour. In one scene, a bull with bangs talks to Ferdinand’s butt. So, haha? In another scene, a matador talks about how amazing his butt is. His butt isn’t amazing at all (I prefer the JLo kind).

There’s also a random ass dance-off between the racist horses and the bulls that remind me of crappy parodies and all things Wayans brothers related. There’s also a goat who likes eating random objects and puking them out. I wish it ate this movie and puked it out, instead.

All the characters can be surmised in one line. Ferdinand doesn’t like to fight. He’s voiced by John Cena. He’s kinda like The Rock in “Moana”, except 0% similar. Cena doesn’t embody a character. Ferdinand literally sounds like John Cena being the boring John Cena we’ve been seeing on WWE for the past decade.

Then there’s the bull that likes to fight. He broods a lot. There’s also the bull with bangs who talks to butts. And erm… is there anyone else? I don’t know. Do I know any of these supporting characters’ names? No. Am I going to find out? No. At least I remember Ferdinand, right? Yeah, only because that’s the title of the movie.

You know what’s worse than crappy characters? A crappy car chase. Cause animals driving vehicles is like totally hilarious, right? My stomach actually hurts from laughing. Oh, wait, nope. I just desperately need to take a shit. How are animals able to drive?! I’m fine with animals driving in a movie like “Zootopia”, cause in that movie the animals are pretty much like humans — they have jobs and buy groceries. Here, the animals are animals. So why on earth are they driving???!!!

But you know what’s the most nonsensical aspect of this movie? Check this out:

Ferdinand is born on a ranch. I’m guessing either his father named him Ferdinand or his human owner did. But in the first act of the movie, Ferdinand runs away from the ranch and is rescued by a little girl. BUT SOMEHOW… MAGICALLY… the little girl knows his name is Ferdinand! Can someone please explain that to me. It would make sense if it wore a tag or collar with its name on it, but that is not the case.

Exhibit A: Young Ferdinand, with no tag.

Imagine this. A stray Tabby cat gives birth to a kitten outside your house. Now, let’s say the momma cat named the kitten, Julio. One day, you decide to adopt the kitten. Would you know that its birth mom named it Julio? How would you know that? All cats ever say is meow and meeeeeeeeeow. You would probably name it cuddles or brownie or something along those lines, right?

Perhaps I’m not giving this movie a fair shot. This movie isn’t made for me. It’s made for little kids. Little, little. Very little. Not-more-than-three-teeth-have-grown little. And those puny beings don’t give a shit about this review to begin with. And, at the very least, this isn’t Minions, which was clearly and specifically designed to reduce IQs and turn kids into stupid, illiterate idiots. Ferdinand has good values that toddlers can pick up. But for the parents who are planning to take their kids? I recommend Tequila shots. Loads of it.

Check out my other reviews and movie-related articles here.

At the very least, this isn't Minions, which was clearly and specifically designed to reduce IQs and turn kids into stupid, illiterate idiots.